The Board of Directors of the Greater Sharpstown Management District and the Small Business Administration have assembled an excellent workshop for business owners of every size, industry, and experience.
If you’re looking for working capital to buy equipment or expand your business, come and learn all you can from the SBA and micro-lenders.

There is no charge for the workshop and luncheon. Seating is limited.
RSVP to Alice Lee at alee@hhcllp.com by February 15, 2012

(next to the Hilton Garden Inn Westbelt; 2nd floor above the Subway) 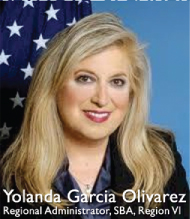 Yolanda Garcia Olivarez was appointed Regional Administrator for SBA’s Region VI in August 2009. As Regional Administrator, Olivarez is responsible for the delivery of
the agency’s programs in Region VI, which is headquartered in Dallas and includes Texas, Arkansas, Louisiana, New Mexico and Oklahoma. The SBA helps Americans start, build, and grow businesses.

Before joining SBA, Olivarez has spent more than 35 years in the trade, commerce and financial services industries. Since 1995 she has been a senior vice president/commercial lender and business development officer at Wells Fargo Bank. She also served 12 years as a Port Commissioner for the Port of Corpus Christi, where she led public finance bond
projects for government entities on the state and federal level. Olivarez was the first woman and Hispanic to chair the commission in its 75 year history.

She has served as a member of several boards and commissions, and for her service has been recognized by several organizations including the National Museum of Mexican Art’s 2009 Sor Juana Women of Achievement Award, the Wall of Honor for Del Mar College, the League of United Latin American Citizens, and the Advance Selena Award. She has also been active in the March of Dimes, United Way, American Heart Association, Texas Tomorrow Fund, Costal Bend Bays and Estuaries, the Corpus Christi Community Development Housing Corporation, Christus Spohn Hospital Board and the Catholic Finance Diocese of South Texas.

Olivarez and her husband, Ronnie, are the proud parents of daughter Sofia Anna.

Manuel R. Gonzalez is the District Director for the 32-county Houston District of the United States Small Business Administration (SBA). He holds a graduate degree from the University of Wisconsin, School of Banking and a Bachelor of Business Administration in Accounting from Texas A&M University. Prior to joining the SBA, Mr. Gonzalez held several upper management positions within the private sector.

Mr. Gonzalez is responsible for directing the activities of the Houston District Office, including supervision of a minority small business portfolio comprised of over 100 firms in the 8(a) program, administration of the University of Houston Small Business Development Center and 15 sub-centers, and coordination of two chapters of SCORE, “Counselors to America’s Small Business.”

As Regional Director, Shirley Brooks is responsible for the management and performance of the loan program in Houston and Eastern part of the State of Texas for ACCION Texas-Louisiana. Named to this position 3 years ago, she
is responsible for budget, marketing, production, delinquency, and chargeoffs for the Region’s loan portfolio.

Ms. Brooks has more than 25 years of finance and sales experience. Prior to joining ACCION Texas-Louisiana, she served as Regional Vice President for Madison Communications. She has also worked as a part of the executive sales and marketing teams for several corporations in the Houston area over the last 25 years.

Shirley Brooks attended the University of Houston where she completed her studies in Business/Finance.

Originally from Sugar Land Texas, she still lives in the community and likes to spend her free time being a mom and hanging out
with her 14 year old daughter.

Paul Cheong received his Bachelor of Science degree in Biology in 1984, and a Masters of Business Administration degree in Finance in 1990 from both the University of Houston and University Park. Prior to joining United Central Bank, Paul Cheong worked at MD Anderson Hospital and managed the Hunan River Restaurant in the River Oaks area.

In 2006, Paul Cheong was selected by the Houston SBA District Office as Financial Service Champion of the Year. From 2009 to 2011, he served as the Chairman of the SBA Houston District Advisory Council. He also served as the 2011 President of the Houston Association of Government Guaranteed Lenders, and currently serves on the Board of Directors for the Association.

Marlon Mitchell is the President and CEO of Houston Business Development, Inc. (HBDi) – a 501c3 non-profit agency
engaged in revitalizing neighborhoods and stimulating economic growth throughout the city of Houston. Established in 1986, HBDi provides tools vital to the expansion and growth of small businesses including access to capital and integrated support services tailored to the needs of emerging entrepreneurs. Under the leadership of Mr.Mitchell, the organization has helped to facilitate over $82 million in funding to small
businesses resulting in the creation of approximately 3,000 jobs for citizens of Houston.